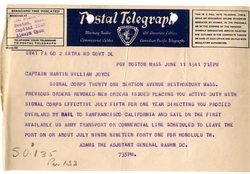 Summary: Martin Joyce is receiving new orders to travel to Honolulu, Hawaii. His old orders were revoked and he is being called to active duty for one year starting July 5th 1941. Martin Joyce is ordered to go on a train to San Francisco, California. From there he will be shipped by boat to Hawaii. He received these orders on June 11, 1941 and was expected to carry them out July 9th 1941. 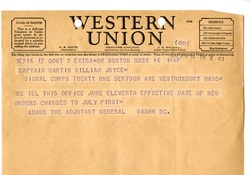 Summary: Adjutant General Adams changes Martin Joyce’s orders from June 11th, 1941 to July 1st, 1941. In other words, the day Martin Joyce leaves for Hawaii gets pushed back about 3 weeks. 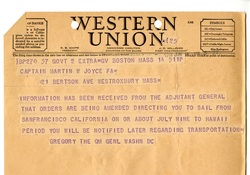 Summary: Martin Joyce is being updated on his travels and where his destination is. It directs him to travel from San Francisco to Hawaii by ship. Martin Joyce is told that he will arrive at Hawaii on July 9th. 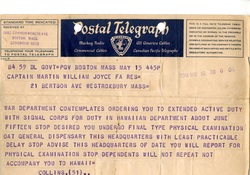 Summary: Martin Joyce is being informed that his active duty time will be extended while he is in Hawaii. The War Department demands that Martin Joyce gets a physical examination before his trip to Hawaii. If he had failed the examination, the document says he was not eligible to go to Hawaii. 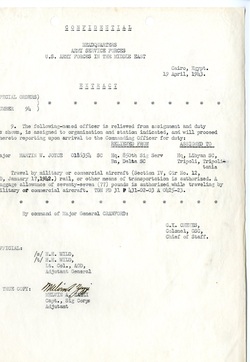 Summary: Martin Joyce is being relieved from his position in Cairo, Egypt, and being re-assigned a position in Tripoli, Libya. Martin Joyce was ordered to travel by military or commercial aircraft, railroads, or other means of transportation. Joyce was only allowed to bring 77 pounds of luggage with him if traveling by aircraft. 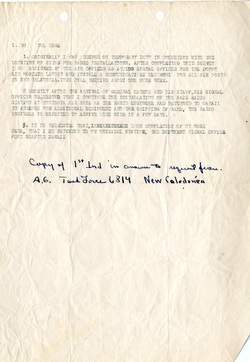 Subject: Request to be returned to Hawaii

Summary: Joyce was assigned by the air officer as an acting signal officer, who is accountable for all communications for the Army. He was responsible for the Poppy Air Force layout and was given the task of installing a communications network for all airports in New Caledonia. Joyce stated in his letter that this will require one more week to complete. He was requested by General Harmon and his staff to continue the installation of the AACS radio station at Tontouta Air Base, since the radio engineer had returned to Hawaii to arrange for additional equipment. Joyce is requesting that once his project is completed, he return to his original station, the Department Signal Office Fort Shafter, Hawaii. 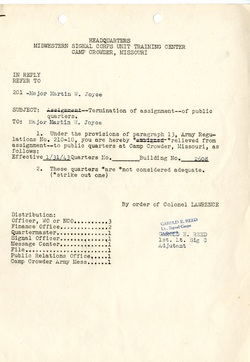 Summary: Colonel Lawrence relieved Joyce from assignment of public quarters at Camp Crowder, Missouri. Lawrence expressed that the termination would be effective as of January 31, 1943. This date shows that the letter was most likely written some time before then. It seems as though Colonel Lawrence was also interested in the state of the quarters Joyce had been living in. He requested that Joyce report whether the quarters were/were not adequate. 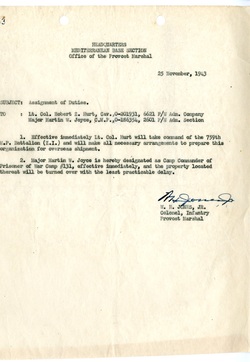 Location: Mediterranean Base Section, Office of the Provost Marshal

Summary: Colonel W. H. Jones Jr. wrote to Major Martin W. Joyce and Lt. Col. Robert Z. Hurt. Jones. First, Colonel Jones ordered Hurt to take command of the 759th M.P. Battalion (Z.I).  Second, he assigned Joyce to be camp commander of Prisoner of War Camp #131 in Oran, North Africa. Joyce was to be in charge of reorganizing the camp, which held 45,000 prisoners of war. Colonel Jones communicated that both assignments would be effective immediately. 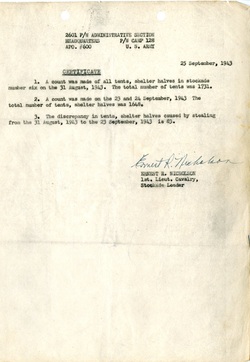 Subject: Count of all the tents and shelter halves in stockade number six. 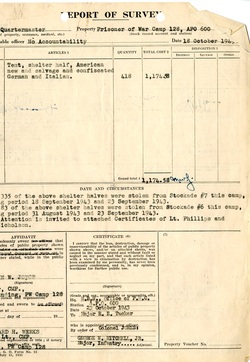 Subject: Request for money to replace stolen shelter halves from the prisoner of war camp.

Summary: Joyce sent a report to Major R. E. Tucker informing him that 418 shelter halves were stolen from Stockades #6 and #7. The total amount of money that was lost from the stolen and destroyed shelter halves is $1,174.58, which is equivalent to $15,385 in 2013. Joyce certified that the loss and destruction of damage was not something that could have been avoided and that the administrators of the camp were not at fault. There was also a certification that stated that the damaged property was no longer usable. 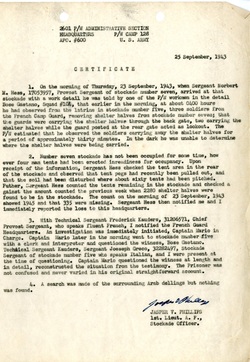 Summary: Sergeant Norbert N. Hess reported that he had seen three soldiers from the French Camp guard steal the shelter halves from stockade #7 at 4 a.m. He saw the robbery from the latrine in stockade #5. He watched two guards carrying the shelter halves and one guard standing as lookout. The entire burglary included 83 shelter halves that were stolen in 30 minutes. Stockade #7 had not been occupied for some time.  However, four man tents had been erected in readiness for occupancy. Captain Mario was in charge of the investigation that followed. Mario questioned the witness at length, but the witness never changed his account. This all happened at the camp where Joyce served as C.O. 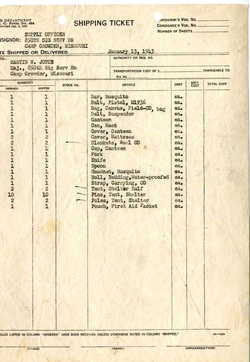 Summary: This document contains a list indicated the number of items shipped to Joyce by a supply officer in Camp Crowder. These items were generally for personal use by Joyce, including a set of utensils, canned meat, two wool blankets, a first aid kit, and a shelter half. The ticket was packaged and sent with the rest of Joyce’s items. 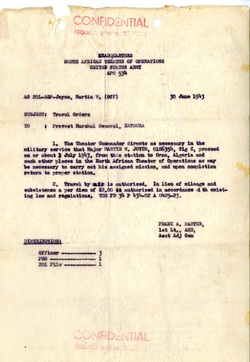 Summary: These travel orders were sent by first Lt. Frank A. Rahter to Provost Marshal General Natousa and called for Joyce’s change in location from his station in Tunisia/Libya, to Oran, Algeria and other North African countries, as may be necessary. Upon his completion of his assigned mission, Joyce was ordered to return to his proper station. The lieutenant also added that Joyce was permitted to travel by air. Since this pertained to one of Joyce's missions, it was a confidential document. 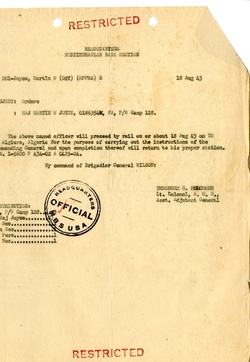 Summary: Lt. Col. Hodcombe ordered Joyce to “proceed by rail” to Algiers, Algeria in order to carry out the instructions of the commanding General. 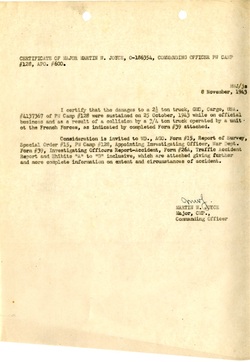 Summary: Joyce reports the collision of a U.S. cargo truck and a French truck. A 2 ½ ton truck, GMC, Cargo, USA was hit while on official business by a ¾ ton truck operated by a unit of the French forces. 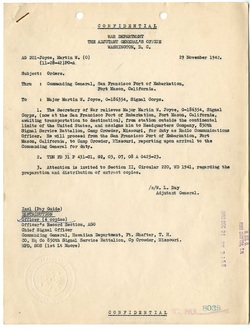 Summary: The Secretary of War relieves Martin W. Joyce from a station outside of the continental U.S, and assigns him to a new Signal Service Battalion in Missouri, where he will work as Radio Communications officer. He will report upon arrival to the commanding general for duty. 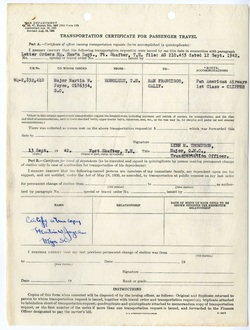 Summary: Ticket given to Martin Joyce from Honolulu to San Francisco to begin his work as a Radio Commissions officer. Authorized by the War Department. 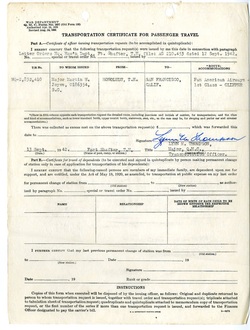 Summary: Ticket given to Martin Joyce to travel from Honolulu to San Francisco to begin his new work as a Radio Commissions officer. Authorized by the War Department. 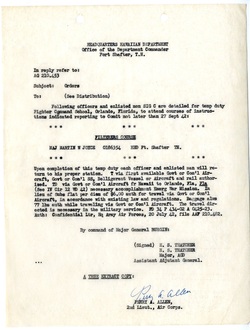 Summary: Joyce was sent to temporary duty in Fighter Command School, located in Orlando, FL.  This was a temporary order, and upon completion he would return to his normal post. He was told to remain in accordance with existing laws and regulations of travel (e.g. 77 lbs maximum, $6 auth for travel) 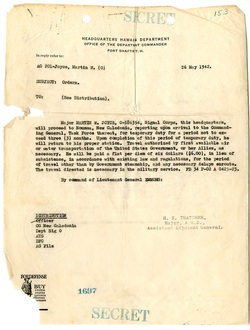 Summary: Thatcher ordered Joyce to report to Noumea, New Caledonia for a period of three months. Upon completion he should return to his regular post. He will be paid $6.00 for any travel other than government steamship and delays.