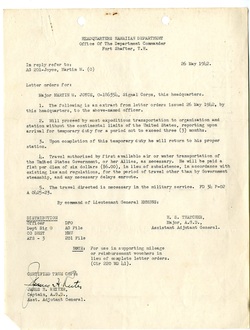 Subject: Military Orders/ for Joyce in Military Station in Hawaii

Summary: Joyce was expected to report to stations outside the United States’ boundaries for a period not to exceed three months. Authorization was approved by the first available water and air transportation by the United States government. He would be paid a rate of $6.00, including days of delayed travel, while travelling, except by government steamship, for self-maintenance. 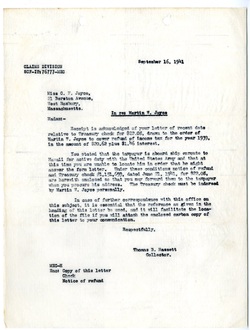 Summary: In this document, Joyce’s sister is being informed that she is being sent Joyce’s tax refund since he is en route to Hawaii for service and cannot be reached by mail. The check for $22.08 (which would be $339.67 in 2013) was enclosed with the letter so that Mrs. Joyce would be able to forward it to her husband. 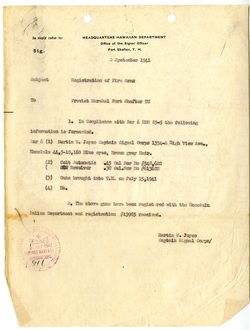 Summary: This file indicates that Joyce was given authorized access to two guns, an automatic and a revolver, which were brought into the headquarters on July 15, 1941. The document describes Joyce and confirms that these guns were registered with the Honolulu Police Department. 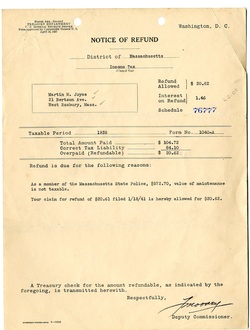 Summary: Joyce received an Information Return Form courtesy of the IRS. According to the form he earned $1,380 in “salaries, wages, fees, commissions, and bonuses” in the year 1942. In 2013 he would have received $21,229.31 as his yearly income. He was supposed to fill the form out to aid him in figuring out his income tax return. The form was to be returned to Returns Distribution Section, Washington, D.C. by February 15, 1942. 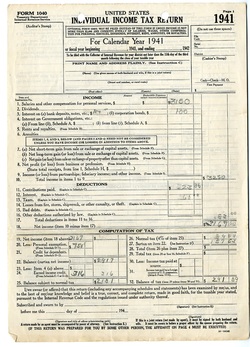 Summary: Joyce made $3,150 in salaries and other compensation for personal services, with an interest on bank deposits of $100. Deductions totaled at $23 for contributions and $60 for taxes. His net income was $3,167, which in today’s terms would be the same as $48,719.74.  Most of this form is left blank, and his signature isn’t present. It appears to be a working copy because he would have had to mail in this tax form. 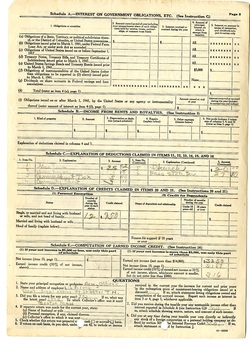 Summary: This continuation of Joyce’s tax return form explains the deductions and credits claimed. Joyce’s deductions included a gas tax of $25, community chest $3, church $20, Mass state tax $27. He was not married, so he paid a personal exemption of $750. At this time his personal house was located in Boston Mass (even though he was moving around a lot at this time), so he had to send his taxes to Boston. Many parts of this page were also left blank. 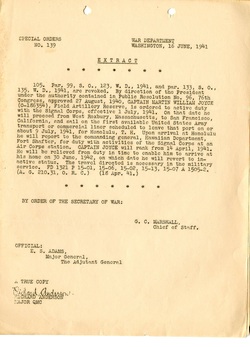 
Summary: This file is the official document calling Martin Joyce to duty in the Field Artillery Reserve. It states that Joyce will proceed from West Roxbury, Massachusetts to San Francisco, California on July 1, 1941 in order to sail to Honolulu, T.H. In Honolulu, he will report to the commanding general, Hawaiian Department, Fort Shafter for duties. He will be relieved from duty on June 30th, 1942 and “revert to an inactive status.” This order was sent by the Chief of Staff C. G. Marshall. 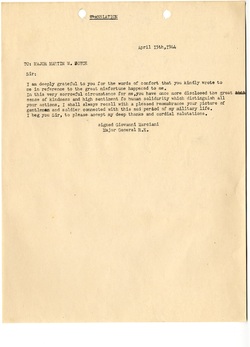 Summary: This document is a letter to Joyce from Italian prisoner Marciani, who thanks Joyce for his kindness in a previous letter regarding Marciani’s “great misfortune.” Marciani is grateful for Joyce’s “sense of kindness and high sentiment of human solidarity.” This letter highlights many favorable aspects of Joyce’s personality. 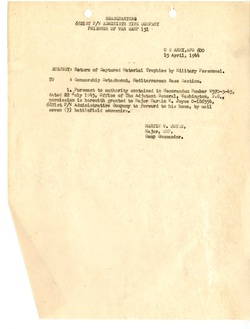 Summary: This is a letter in which Joyce asks members of the Mediterranean Base Section for approval of sending home, by mail, seven battlefield souvenirs. 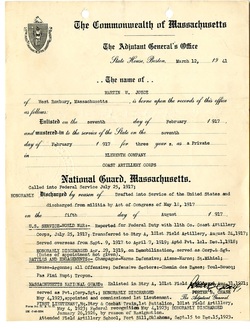 Subject:  This document reviews his many positions and locations in the military and finally provides him with an honorable discharge.

Summary: Joyce, from West Roxbury MA, enlisted in the military on February 17th, 1917. He served for three years as a private in the Eleventh Company of the Coast Artillery Corps. On July 25th, 1917, he was called into the Federal Service, and was discharged August 5th, 1917. He was then transferred to the 101st Field Artillery to fight in WWI on August 24, 1917 where he served overseas from September 9th 1917 to April 7th 1919. Joyce fought in many battles including Champagne-Marne, Aisne-Marne, and others. Joyce served as a private, sergeant, and corporate. He was recognized for years after. In the upper left hand corner of the document you can find the Great Seal of Massachusetts, which is also shown in the form of a notary imbedded in the paper. The notary says ‘Aquitaine General’s Office, Boston, Mass.’